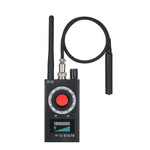 This little unit gives you peace of mind

You can make a sweep and detect a wide range of illegal spying devices including hidden wireless cameras, GPS trackers, digital recorder etc. Don’t kid yourself and think you live a private life from anyone listening or watching.

With the rampant spy cameras these days, it becomes unsafe to live outside home.

You don't want to live in an airbnb or hotel room and then later find yourself and your kids in some website for sale. Using NoSpy Pro™ Hidden Camera Detector to scan your home, hotel room, airbnb, car, office, will give you a great sense of security.

How can you use it?

This is perfect solution for anyone who is concerned that they might be a victim of illegal surveillance.

When NoSpy Pro Hidden Camera Detector detect the eavesdropping devices or spy camera, the front LED lamp of the detector will light up, and there will be vibration and sound alerts. It has Ten levels LED indicator, the closer to bugs the more noise and the higher LED level.

The back of the detector is equipped with six high-brightness laser lights. Click GS buttom to turn on the laser light. Peering from the front window you can see reflection of spy camera lens.

Where can you use it?

NoSpy Pro™ Hidden Camera Detector is a very secure way to save your privacy. You don’t have to be afraid of any hidden cameras or spy devices anywhere you go. Motels, Hotels, Airbnb-s or dressing rooms are most likely under surveillance. Using this Camera detector, hidden camera, spy cam and bug can be detected accurately.

Can be used in offices, important business negotiations, confidential meetings, Protect your conversation and keep your business secrets safe. This signal detector would be your best choice to find out the car tracking device, GPS signal locator. You will never be tailed again! From place to place, this signal detecting device give you piece of mind. It can also detect intense radio signals radiation around your home, whether there is strong electromagnetic radiation leaks from the household appliances, such as computers, radio television etc or abnormal high magnetic field. Just get NoSpy Pro™  NOW for your Peace of Mind.