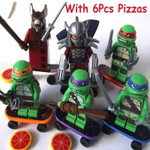 You do not want your child to be exposed too much to electronics? Are you looking for an intellectual game to stimulate your child�s brain development? Building blocks will a great gift for your kids. This is going to promote children�s creativity when they match pieces and exciting games will start. Get yours today!

Anyone who lived through the '80s and early '90s knows the Teenage Mutant Ninja Turtles. Their's is the true story of four talking reptiles and one very large rat who befriend a large-breasted woman on their way to fighting a walking cheese grater and in the process taught us all the way of the ninja. And pizza.�

All that started from humble beginnings late one night when struggling artists Peter Laird and Kevin Eastman sketched some goofy-looking turtles dressed as ninjas. They decided to do a one-shot comic, started their own company called Mirage Studios, signed a licensing deal on a napkin and just like that, a billion dollar franchise was born. Seeing Batman handily defeat four turtles trained in the art of ninjutsu without breaking a sweat is a master class in awesome. And despite their embarrassing showing, the Turtles can't help but agree.� Suffice to say, they all eventually join forces to fight Shredder and pretty much every bad guy that ever existed in Gotham, including The Joker, who for some reason mutates into a cobra. Because Turtle Power. The Teenage Mutant Ninja Turtles seem tailor-made for Japan. So it's no surprise that in the late '90s not one but two OVAs (their version of direct-to-video) were created to coincide with the release of the TMNT-inspired Japanese toy lines, Supermutants and Metal Mutants. Originally these specials were only available in Japan, but thanks to the Internet and some helpful fansubs the rest of the world can now enjoy this super mutation.�